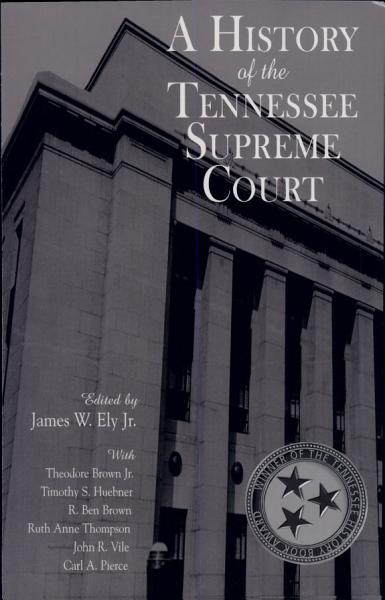 In this first comprehensive history of the Tennessee Supreme Court, seven leading scholars explore the role played by the Court in the social, economic, and political life of the state. Charting the evolution and organization of the Court (and its predecessor, the Superior Court of Law and Equity), the authors also assess the work of the Court within the larger context of the legal history of the South. Arranged chronologically, this volume covers the period from statehood in 1796 through the judicial election of 1998 and traces the range of contentious issues the Court has faced, including slavery, Reconstruction, economic rights, the regulation of business, and race and gender relations. The authors also outline the Court's relationship with the Supreme Court of the United States and chronicle the achievements of the Court in public and private law, state constitutional law, property law, criminal justice, and family law. The central themes that emerge include the nature of federalism, the search for judicial independence, and the practice of judicial review. As the authors demonstrate, the work of the Tennessee Supreme Court highlights the importance of state courts to the federal system and illuminates the interplay between regionalism and national norms in shaping a state's legal culture. Indeed, as mediator of conflicts between traditional southern values and national economic and social trends, the Court has generally, if sometimes belatedly, adopted national legal standards. Further, while the Court has tended to defer to the state's legislative decision-making process, it has on occasion assumed a more activist role in order to assert individual rights for Tennessee'scitizens. Sponsored by the Tennessee Supreme Court Historical Society, this book is written for anyone interested in Tennessee history in general or legal history in particular. Appendixes include a comprehensive table of cases and biographical information about all the Court's judges.

A History of the Tennessee Supreme Court

Making America: A History of the United States, Brief

Making America: A History of the United States, Volume 2: Since 1865, Brief

A Brief History of the United States

Authors: John Bach McMaster
Categories: History
Type: BOOK - Published: 2006-04-01 - Publisher: Cosimo, Inc.
A bestseller when it was first published in 1883, this first volume of historian McMaster's magnum opus--which eventually stretched to eight volumes--is a lively history of the United States that is as entertaining as it is informative.

The New Encyclopedia of Southern Culture

A History of US: War, Peace, and All That Jazz

History of the Lost State of Franklin

Authors: Samuel Cole Williams
Categories: Reference
Type: BOOK - Published: 1994-03 - Publisher: The Overmountain Press
In the decade following the American Revolution, a bitter political battle developed over the land west of the Appalachian Mountains. Pressure from the federal government resulted in the 1784 cession of the western claims of North Carolina. Shortly afterward, the North Carolina legislature rescinded the cession, but the settlers had