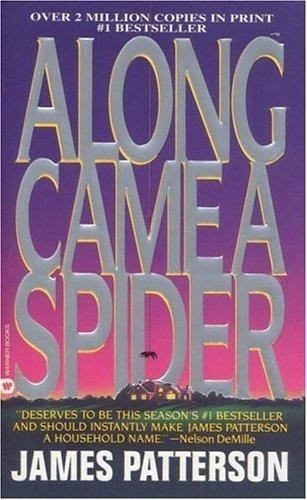 Along Came a Spider begins with the double kidnapping of the daughter of a famous Hollywood actress and the young son of the secretary of the Treasury. And that's only the beginning! Gary Soneji is a murderous serial kidnapper who wants to commit the crime of the century. Alex Cross is the brilliant homicide detective pitted against him. Jezzie Flanagan is the female supervisor of the Secret Service who completes one of the most unusual suspense triangles in any thriller you have ever read. From Publishers Weekly This second big winter thriller by a writer named Patterson (see Fiction Forecasts, Oct. 19) features a villain (a multiple-personality serial killer/kidnapper) whom the publisher hopes will remind readers of Thomas Harris's Hannibal Lecter, and a hero who is compared to those of Jonathan Kellerman. Unfortunately, the novel has few merits of its own to set against those authors' works. Hero Alex Cross is in fact a black senior detective in Washington, D.C., who is also a psychiatrist and has a facile but not entirely convincing line of sentimental-cynical patter. The villain is Gary Soneji/Murphy (read Hyde/Jekyll), who kills for recognition, and finally kidnaps the kids of prominent parents. Alex is soon on the case, more enraged by Gary's killing of poor ghetto blacks than by the Lindbergh-inspired kidnapping, and becomes involved with a gorgeous, motorcycle-riding Secret Service supervisor who is not what she seems. Soneji/Murphy is eventually captured--but can the bad part of him be proven guilty? There is even a hint at the end that he may survive for a sequel, though the reader has virtually forgotten him by then. Spider reads fluently enough, but its action and characters seem to have come out of some movie-inspired never-never land. If a contemporary would-be nail-biter is to thrill as it should, it urgently needs stronger connections to reality than this book has. Come back, Thomas Harris! 150,000 first printing; Literary Guild main selection. Copyright 1992 Reed Business Information, Inc. From Library Journal Alex Cross, a black Washington, D.C., police detective with a Ph.D. in psychology, and Jezzie Flanagan, a white motorcycling Secret Service agent, become lovers as they work together to apprehend a chilling psychopath who has kidnapped two children from a posh private school. The psychotic villain, who aspires to become more notorious than Lindbergh baby kidnapper Bruno Hauptmann, is effectively nightmarish. Atypical characters, sex, sometimes shocking violence, and several surprising plot twists are all attention-grabbing, while short chapters with a shifting viewpoint add brisk pacing and genuine suspense. Patterson's storytelling talent is in top form in this grisly escapist yarn. Highly recommended for public libraries. Previewed in Prepub Alert, LJ 11/1/92. - Will Hepfer, SUNY at Buffalo Libs. Copyright 1992 Reed Business Information, Inc.

Authors: James Patterson
Categories:
Type: BOOK - Published: 1993-02-01 - Publisher: Nora Roberts
Along Came a Spider begins with the double kidnapping of the daughter of a famous Hollywood actress and the young son of the secretary of the Treasury. And that's only the beginning! Gary Soneji is a murderous serial kidnapper who wants to commit the crime of the century. Alex Cross

Authors: Maryanne Raphael
Categories: Biography & Autobiography
Type: BOOK - Published: 2002-08-01 - Publisher: iUniverse
Another beautiful mind gives us a rare opportunity to experience the torments of hallucinations, delusions and anxieties a biochemical brain disorder can bring. In her most recent book, ALONG CAME A SPIDER: A PERSONAL LOOK AT MADNESS, author Maryanne Raphael shares with us her intimate feelings, deepest pain, and eventual

... Trends in Different Types of Public and Private Relief in Urban Areas, 1929-35

Authors: Kate SeRine
Categories: Fiction
Type: BOOK - Published: 2013-08-01 - Publisher: eKensington
"A new fantastic ORIGINAL paranormal series is born!" –Paranormal Cravings Along came a spider. . . When Trish Muffet is attacked at a grisly crime scene, the last person she expects to come to her rescue is Nicky "Little Boy" Blue. But since walking away from everything two years before,