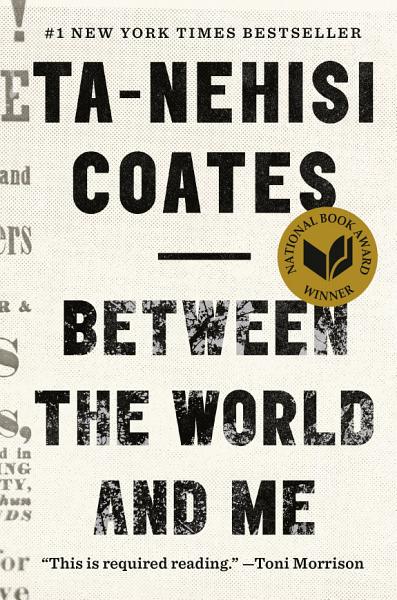 #1 NEW YORK TIMES BESTSELLER • NATIONAL BOOK AWARD WINNER • NAMED ONE OF TIME’S TEN BEST NONFICTION BOOKS OF THE DECADE • PULITZER PRIZE FINALIST • NATIONAL BOOK CRITICS CIRCLE AWARD FINALIST • ONE OF OPRAH’S “BOOKS THAT HELP ME THROUGH” • NOW AN HBO ORIGINAL SPECIAL EVENT Hailed by Toni Morrison as “required reading,” a bold and personal literary exploration of America’s racial history by “the most important essayist in a generation and a writer who changed the national political conversation about race” (Rolling Stone) NAMED ONE OF THE MOST INFLUENTIAL BOOKS OF THE DECADE BY CNN • NAMED ONE OF PASTE’S BEST MEMOIRS OF THE DECADE • NAMED ONE OF THE TEN BEST BOOKS OF THE YEAR BY The New York Times Book Review • O: The Oprah Magazine • The Washington Post • People • Entertainment Weekly • Vogue • Los Angeles Times • San Francisco Chronicle • Chicago Tribune • New York • Newsday • Library Journal • Publishers Weekly In a profound work that pivots from the biggest questions about American history and ideals to the most intimate concerns of a father for his son, Ta-Nehisi Coates offers a powerful new framework for understanding our nation’s history and current crisis. Americans have built an empire on the idea of “race,” a falsehood that damages us all but falls most heavily on the bodies of black women and men—bodies exploited through slavery and segregation, and, today, threatened, locked up, and murdered out of all proportion. What is it like to inhabit a black body and find a way to live within it? And how can we all honestly reckon with this fraught history and free ourselves from its burden? Between the World and Me is Ta-Nehisi Coates’s attempt to answer these questions in a letter to his adolescent son. Coates shares with his son—and readers—the story of his awakening to the truth about his place in the world through a series of revelatory experiences, from Howard University to Civil War battlefields, from the South Side of Chicago to Paris, from his childhood home to the living rooms of mothers whose children’s lives were taken as American plunder. Beautifully woven from personal narrative, reimagined history, and fresh, emotionally charged reportage, Between the World and Me clearly illuminates the past, bracingly confronts our present, and offers a transcendent vision for a way forward.

Between the World and Me

Between the World and Me

Authors: aBookaDay
Categories: Political Science
Type: BOOK - Published: 2016-07-27 - Publisher:
Warning: This is an independent addition to Between the World and Me, meant to enhance your experience of the original book. If you have not yet bought the original copy, make sure to purchase it before buying this unofficial summary from aBookaDay. In Between the World and Me by Ta-Nehisi

Between the World of Ta-Nehisi Coates and Christianity

Authors: David Evans, Peter Dula
Categories: Religion
Type: BOOK - Published: 2018-10-24 - Publisher: Wipf and Stock Publishers
Between the world of Ta-Nehisi Coates and Christianity there appears to be the widest difference. Coates’s brief comments on Christianity in his highly acclaimed Between the World and Me make clear that religious faith is alien to his own experience. Still, Christian audiences from congregations to theological schools engaged the

We were eight years in power

We Were Eight Years in Power

Authors: Ta-Nehisi Coates
Categories: Biography & Autobiography
Type: BOOK - Published: 2017-10-03 - Publisher: One World
In this “urgently relevant”* collection featuring the landmark essay “The Case for Reparations,” the National Book Award–winning author of Between the World and Me “reflects on race, Barack Obama’s presidency and its jarring aftermath”*—including the election of Donald Trump. New York Times Bestseller • Finalist for the PEN/Jean Stein Book

Authors: Ta-Nehisi Coates
Categories: Biography & Autobiography
Type: BOOK - Published: 2008-05-06 - Publisher: One World
An exceptional father-son story from the National Book Award–winning author of Between the World and Me about the reality that tests us, the myths that sustain us, and the love that saves us. Paul Coates was an enigmatic god to his sons: a Vietnam vet who rolled with the Black