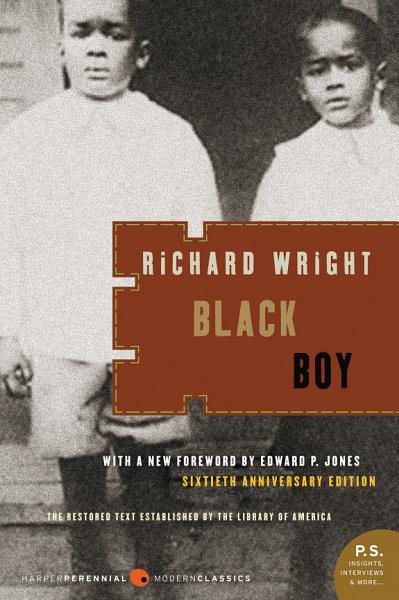 Richard Wright's powerful account of his journey from innocence to experience in the Jim Crow South. It is at once an unashamed confession and a profound indictment--a poignant and disturbing record of social injustice and human suffering. When Black Boy exploded onto the literary scene in 1945, it caused a sensation. Orville Prescott of the New York Times wrote that “if enough such books are written, if enough millions of people read them maybe, someday, in the fullness of time, there will be a greater understanding and a more true democracy.” Opposing forces felt compelled to comment: addressing Congress, Senator Theodore Bilbo of Mississippi argued that the purpose of this book “was to plant seeds of hate and devilment in the minds of every American.” From 1975 to 1978, Black Boy was banned in schools throughout the United States for “obscenity” and “instigating hatred between the races.” The once controversial, now classic American autobiography measures the brutality and rawness of the Jim Crow South against the sheer desperate will it took to survive. Richard Wright grew up in the woods of Mississippi, with poverty, hunger, fear, and hatred. He lied, stole, and raged at those about him; at six he was a “drunkard,” hanging about in taverns. Surly, brutal, cold, suspicious, and self-pitying, he was surrounded on one side by whites who were either indifferent to him, pitying, or cruel, and on the other by blacks who resented anyone trying to rise above the common lot. At the end of Black Boy, Wright sits poised with pencil in hand, determined to "hurl words into this darkness and wait for an echo."

Authors: Richard Wright
Categories: Biography & Autobiography
Type: BOOK - Published: 2009-06-16 - Publisher: Harper Collins
Richard Wright's powerful account of his journey from innocence to experience in the Jim Crow South. It is at once an unashamed confession and a profound indictment--a poignant and disturbing record of social injustice and human suffering. When Black Boy exploded onto the literary scene in 1945, it caused a

Authors: BookCaps
Categories: Computers
Type: BOOK - Published: 2011 - Publisher: BookCaps Study Guides
The perfect companion to Richard Wright's "Black Boy," this study guide contains a chapter by chapter analysis of the book, a summary of the plot, and a guide to major characters and themes. BookCap Study Guides do not contain text from the actual book, and are not meant to be

Authors: Carl Senna
Categories: Literary Criticism
Type: BOOK - Published: 2007-08-20 - Publisher: Houghton Mifflin Harcourt
The original CliffsNotes study guides offer expert commentary on major themes, plots, characters, literary devices, and historical background. CliffsNotes on Black Boy chronicles the alienation of the author – not only from white society, but from his own people. Richard Wright’s novel is a cry of anguish in the face

Authors: Crown Shepherd
Categories: Juvenile Fiction
Type: BOOK - Published: 2020-05-05 - Publisher: Beaver's Pond Press
Black Boy, Black Boy, what do you see? I see a bright future ahead of me! A melodic mantra with a powerful message: Black boys can be a doctor, a judge, the president . . . anything they want to be! Each page depicts a boy looking into the future,