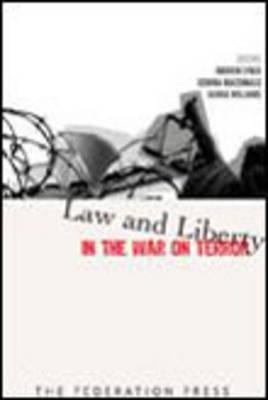 How can we ensure national security against people unafraid to kill themselves along with their victims - people who, self-evidently, will not be deterred by traditional laws which punish offenders after their crimes are committed. This is the challenge for liberal democracies such as Australia. New laws specifically designed to forestall terrorist activity have been a key response. Law and Liberty in the War on Terror describes these laws and debates both their effectiveness and impact on civil liberties. International and domestic commentators from the fields of government, law and political science address questions such as: How does the law define 'terrorism'? Can the criminal justice system accommodate preparatory terrorism offences? Is torture ever acceptable as an interrogative method? What is the role of the judiciary in times of emergency? How do Australia's anti-terrorism laws compare with those of the United Kingdom and New Zealand? How are Australian communities and politics affected by responses to terrorism?"[I] n this book, proponents of the new anti-terrorism laws seek to justify their provisions and opponents argue that the laws go too far. These chapters also show the extent of the changes that have been made to our legal and administrative structures. ... The chapters in this book cannot be dismissed as mere academic analyses. They have to do with the lives and aspirations of all Australians. They ask whether Australia is, and whether it will be, a united, secure, free and confident nation." - Sir Gerard Brennan AC KBE, former Chief Justice of Australia