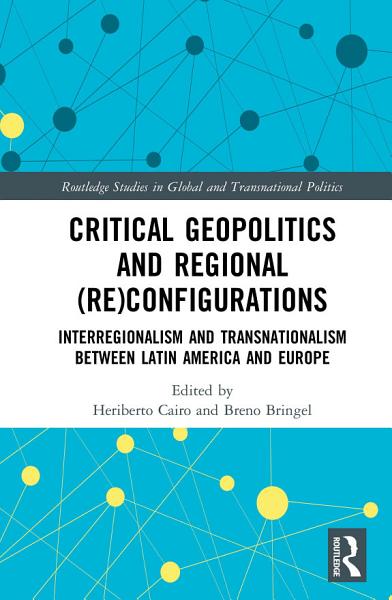 This book seeks to develop our understanding of the contemporary geopolitical reconfigurations of two regions of the world system with high cultural affinity and traditional close relations: Latin America and Europe. Relations between Latin America and Europe have been interpreted generally in the social sciences as synonyms of interstate relations. However, although States remain the most important actor in the geopolitical scene, they have been deeply reconfigured in recent decades, impacted by transnational dynamics, politics and spaces. This book highlights interregional relations and transnational dynamics between Latin America and Europe from a critical geopolitics perspective, promoting a new look for interregional relations which encompasses international cooperation and development, global policies, borders, inequalities and social movements. It brings attention to the relevance of interregionalism in the current geopolitical reconfiguration of the world system, but also argues for systematic inclusion of relevant new social actors and imaginaries in this traditional sphere of states. These social actors, particularly social movements and practices of contestation, are developing not only "international" bonds but a new "transnational" field, where networks defy traditional territorial orders. This volume seeks to generate a new discussion among scholars of geopolitics, international relations, social theory and social movement studies by encouraging a development of an interregional and transnational perspective of the two regions.

Authors: Heriberto Cairo, Breno Bringel
Categories: Political Science
Type: BOOK - Published: 2019-07-08 - Publisher: Routledge
This book seeks to develop our understanding of the contemporary geopolitical reconfigurations of two regions of the world system with high cultural affinity and traditional close relations: Latin America and Europe. Relations between Latin America and Europe have been interpreted generally in the social sciences as synonyms of interstate relations.

The Palgrave Handbook of Disciplinary and Regional Approaches to Peace

Authors: Oliver Richmond, Sandra Pogodda, Jasmin Ramovic
Categories: Political Science
Type: BOOK - Published: 2016-03-15 - Publisher: Springer
In this handbook, a diverse range of leading scholars consider the social, cultural, economic, political, and developmental underpinnings of peace. This handbook is a much-needed response to the failures of contemporary peacebuilding missions and narrow disciplinary debates, both of which have outlined the need for more interdisciplinary work in International

Critical Geopolitics of the Polar Regions

Authors: Dorothea Wehrmann
Categories: Political Science
Type: BOOK - Published: 2018-11-13 - Publisher: Routledge
Focusing on both Polar Regions, this book provides a comprehensive understanding of political processes related to the rapidly changing Arctic and Antarctic, where the environmental impacts of human activities are extremely visible. Environmental changes in the Arctic and the Antarctic are increasingly seen as barometers of the global impact of

Authors: A. Subramanyam Raju
Categories: South Asia
Type: BOOK - Published: 2007 - Publisher: Gyan Publications
A collection of articles by the scholars across the South Asian region, attempts to suggest ways and means to overcome the problems of varied colours-major bottlenecks in achieving a particular identity in affirmation-to reconstruct South Asia region. The need of a South Asian Union and a single currency in the

The Geopolitics of Australia's Regional Relations

Authors: D. Rumley
Categories: Business & Economics
Type: BOOK - Published: 2001-06-30 - Publisher: Springer Science & Business Media
This is the first book which examines Australia's external relations from a political-geographical perspective. It stresses above all the changing orientation of these relationships towards the Asia-Pacific region. It takes a realistic perspective, emphasising the internal relationships among environment, society, economy and politics in a spatial context. Audience: This volume

Global Geopolitical Change and the Asia-Pacific

Authors: Tatsuya Chiba, Yoriko Fukushima, Akiko Takagi
Categories: Political Science
Type: BOOK - Published: 1996 - Publisher:
This work looks at events which have had fundamental implications for the geopolitical relations in and with the Asia-Pacific region. It covers issues such as regional definition, the emergence of regional integration, the role of Japan, China, Russia and India, and security and trade.