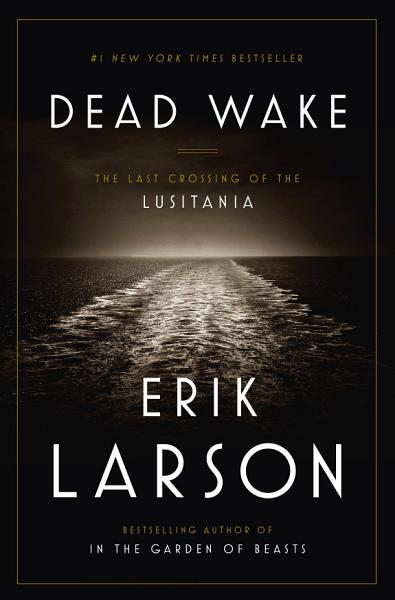 #1 New York Times Bestseller From the bestselling author and master of narrative nonfiction comes the enthralling story of the sinking of the Lusitania On May 1, 1915, with WWI entering its tenth month, a luxury ocean liner as richly appointed as an English country house sailed out of New York, bound for Liverpool, carrying a record number of children and infants. The passengers were surprisingly at ease, even though Germany had declared the seas around Britain to be a war zone. For months, German U-boats had brought terror to the North Atlantic. But the Lusitania was one of the era’s great transatlantic “Greyhounds”—the fastest liner then in service—and her captain, William Thomas Turner, placed tremendous faith in the gentlemanly strictures of warfare that for a century had kept civilian ships safe from attack. Germany, however, was determined to change the rules of the game, and Walther Schwieger, the captain of Unterseeboot-20, was happy to oblige. Meanwhile, an ultra-secret British intelligence unit tracked Schwieger’s U-boat, but told no one. As U-20 and the Lusitania made their way toward Liverpool, an array of forces both grand and achingly small—hubris, a chance fog, a closely guarded secret, and more—all converged to produce one of the great disasters of history. It is a story that many of us think we know but don’t, and Erik Larson tells it thrillingly, switching between hunter and hunted while painting a larger portrait of America at the height of the Progressive Era. Full of glamour and suspense, Dead Wake brings to life a cast of evocative characters, from famed Boston bookseller Charles Lauriat to pioneering female architect Theodate Pope to President Woodrow Wilson, a man lost to grief, dreading the widening war but also captivated by the prospect of new love. Gripping and important, Dead Wake captures the sheer drama and emotional power of a disaster whose intimate details and true meaning have long been obscured by history.

Authors: Erik Larson
Categories: History
Type: BOOK - Published: 2015-03-10 - Publisher: Broadway Books
#1 New York Times Bestseller From the bestselling author and master of narrative nonfiction comes the enthralling story of the sinking of the Lusitania On May 1, 1915, with WWI entering its tenth month, a luxury ocean liner as richly appointed as an English country house sailed out of New

Authors: Instaread
Categories: Transportation
Type: BOOK - Published: 2015-04-01 - Publisher: Instaread Summaries
Dead Wake by Erik Larson | A 15-minute Summary & Analysis Preview: Dead Wake by Erik Larson is a non-fiction account of the German Unterseeboot, or U-boat, sinking of Lusitania, a British merchant vessel belonging to Cunard Line, on May 7, 1915 and its aftermath. On the night of May

Authors: Abookaday
Categories: Transportation
Type: BOOK - Published: 2016-09-28 - Publisher: Createspace Independent Publishing Platform
Warning: This is an independent addition to Dead Wake, meant to enhance your experience of the original book. If you have not yet bought the original copy, make sure to purchase it before buying this unofficial summary from aBookaDay. Dead Wake: The Last Crossing of the Lusitania by bestselling author

Authors: Drac Von Stoller
Categories: Fiction
Type: BOOK - Published: 2013-04-11 - Publisher: Drac Von Stoller
Being curious like little boys are, Jimmy had a hard time sleeping at night because of what lies beyond his backyard in the woods. Jimmy would be even more scared at night when it was storming outside. He would get out of bed, and go over to the window, and

Authors: Bruce Jackson
Categories: Music
Type: BOOK - Published: 1999 - Publisher: University of Georgia Press
Making it in Hell, says Bruce Jackson, is the spirit behind the sixty-five work songs gathered in this eloquent dispatch from a brutal era of prison life in the Deep South. Through engagingly documented song arrangements and profiles of their singers, Jackson shows how such pieces as "Hammer Ring," "Ration

Authors: Roger Smith
Categories: Fiction
Type: BOOK - Published: 2010-02-02 - Publisher: Henry Holt and Company
An amphetamine-fueled thriller about a bombshell American widow on the run in Cape Town's violent badlands—from a writer being compared to George Pelecanos and Richard Price A split-second decision with no second chance: get it wrong and you wake up dead. On a blowtorch-hot night in Cape Town, American ex-model

To Wake the Dead

Authors: Steven W Woeste
Categories: Fiction
Type: BOOK - Published: 2006-04-04 - Publisher: iUniverse
To Wake The Dead is a new take on the raising the dead phenomenon. What happens when people rationally try to investigate the living dead, and to give meaning to their existence? Can such an otherworldly occurrence be justified with the current scientific understanding of living things? How would people,