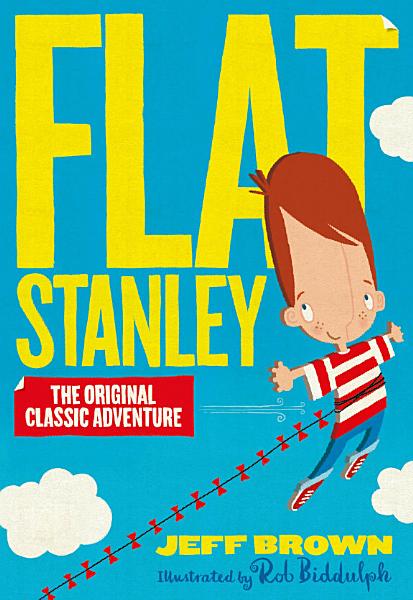 The magical and brilliantly funny adventures of everyone’s favourite flat boy – Flat Stanley. With wonderful new illustrations by the award-winning author/illustrator Rob Biddulph. Stanley Lambchop was just an ordinary boy – until a noticeboard fell on him. Now he’s flat as a pancake! Being flat is fantastic – he can be rolled up, sent in the post and even fly like a kite. But it’s not all fun and games . . . there are thieves in town. Can Flat Stanley be a hero? Jeff Brown’s world-famous character Flat Stanley continues to charm half a century after he first found his way into print. Jeff Brown was a story editor and assistant film producer in Hollywood. He worked on the at The New Yorker and the Saturday Evening Post, and his stories appeared in these magazines and many others. Jeff created the classic character Flat Stanley, whose adventures have been beloved by children around the world for more than 50 years. He died in Manhattan in 2003. Rob Biddulph is a bestselling and award-winning children’s book author and illustrator. He won the Waterstones Children’s Book Prize for Blown Away and was nominated for the Kate Greenaway medal for GRRRRR! His other books include Odd Dog Out (Aug 2016) and Sunk! (March 2017).

Authors: Jeff Brown
Categories: Juvenile Fiction
Type: BOOK - Published: 2015-10-13 - Publisher: HarperCollins
Flat Stanley and Arthur are excited to go ice-skating on the frozen lake. But when the weather suddenly warms up, Stanley finds himself skating on thin ice! Beginning readers will love following along with Flat Stanley's winter adventure. Flat Stanly: On Ice is a Level Two I Can Read book,

Authors: Jeff Brown
Categories: Heroes
Type: BOOK - Published: 2012 - Publisher:
Flat Stanley travels to Washington D.C. to receive a special award from the President herself, but even after all his adventures, he is still not sure if he deserves to be called a hero.

Authors: Jeff Brown
Categories: Juvenile Fiction
Type: BOOK - Published: 2012-03-20 - Publisher: HarperCollins
Flat Stanley, the beloved character created by Jeff Brown, is back in this fun I Can Read book about baseball! When Stanley plays center field for his baseball team, he is a flat-out great player! None of the other players can float to catch the highest hits, or earn walks

Authors: Lori Haskins Houran, Jeff Brown
Categories: Children's stories
Type: BOOK - Published: 2013-03-01 - Publisher: Egmont Books (UK)
A charming sports story from Jeff Brown’s Flat Stanley for Egmont’s Blue Banana series. When Stanley Lambchop joins the rounders team, he discovers that being flat can help him play. But not everyone thinks flat players should be allowed. You can't change who you are, though, as Stanley soon discovers