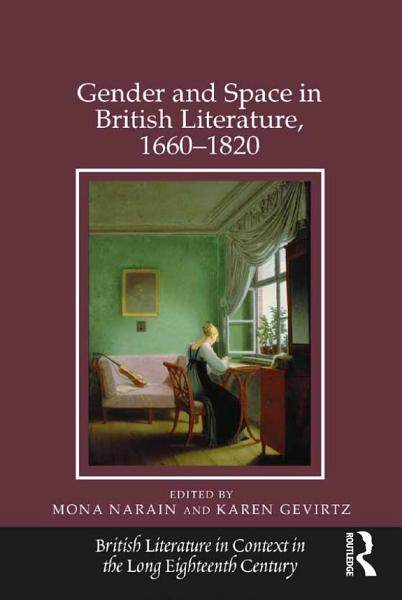 Between 1660 and 1820, Great Britain experienced significant structural transformations in class, politics, economy, print, and writing that produced new and varied spaces and with them, new and reconfigured concepts of gender. In mapping the relationship between gender and space in British literature of the period, this collection defines, charts, and explores new cartographies, both geographic and figurative. The contributors take up a variety of genres and discursive frameworks from this period, including poetry, the early novel, letters, and laboratory notebooks written by authors ranging from Aphra Behn, Hortense Mancini, and Isaac Newton to Frances Burney and Germaine de Staël. Arranged in three groups, Inside, Outside, and Borderlands, the essays conduct targeted literary analysis and explore the changing relationship between gender and different kinds of spaces in the long eighteenth century. In addition, a set of essays on Charlotte Smith’s novels and a set of essays on natural philosophy offer case studies for exploring issues of gender and space within larger fields, such as an author’s oeuvre or a particular discourse. Taken together, the essays demonstrate space’s agency as a complement to historical change as they explore how literature delineates the gendered redefinition, occupation, negotiation, inscription, and creation of new spaces, crucially contributing to the construction of new cartographies in eighteenth- and early nineteenth-century England.

Authors: Mona Narain, Karen Gevirtz
Categories: Literary Criticism
Type: BOOK - Published: 2016-04-15 - Publisher: Routledge
Between 1660 and 1820, Great Britain experienced significant structural transformations in class, politics, economy, print, and writing that produced new and varied spaces and with them, new and reconfigured concepts of gender. In mapping the relationship between gender and space in British literature of the period, this collection defines, charts,

Representing the Eighteenth Century in Film and Television, 2000–2015

The Routledge Research Companion to Nineteenth-Century British Literature and Science

Authors: John Holmes, Sharon Ruston
Categories: Literary Criticism
Type: BOOK - Published: 2017-05-18 - Publisher: Taylor & Francis
Tracing the continuities and trends in the complex relationship between literature and science in the long nineteenth century, this companion provides scholars with a comprehensive, authoritative and up-to-date foundation for research in this field. In intellectual, material and social terms, the transformation undergone by Western culture over the period was

Women’s Voices and Genealogies in Literary Studies in English

Authors: Susan Broomhall
Categories: History
Type: BOOK - Published: 2015-03-05 - Publisher: Routledge
Spaces for Feeling explores how English and Scottish people experienced sociabilities and socialities from 1650 to 1850, and investigates their operation through emotional practices and particular spaces. The collection highlights the forms, practices, and memberships of these varied spaces for feeling in this two hundred year period and charts the

The Women Who Popularized Geology in the 19th Century

Authors: Kristine Larsen
Categories: Science
Type: BOOK - Published: 2017-10-12 - Publisher: Springer
The female authors highlighted in this monograph represent a special breed of science writer, women who not only synthesized the science of their day (often drawing upon their own direct experience in the laboratory, field, classroom, and/or public lecture hall), but used their works to simultaneously educate, entertain, and, in

The Future of Feminist Eighteenth-Century Scholarship

Authors: Robin Runia
Categories: Literary Criticism
Type: BOOK - Published: 2017-11-10 - Publisher: Routledge
There is an unfortunate argument being made that feminist scholarship of eighteenth-century literary studies has fulfilled its potential in academic circles. The Future of Eighteenth-Century Feminist Scholarship: Beyond Recovery shows us otherwise. Each of the essays in this volume reaffirms the feminist principles that form the foundation of this area,