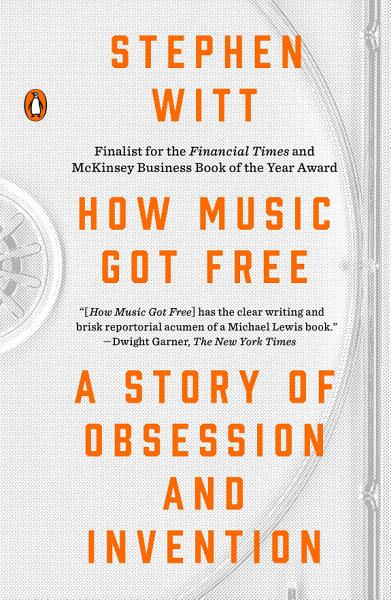 Soon to be an Apple TV+ documentary series One of Billboard’s 100 Greatest Music Books of All Time Finalist for the Los Angeles Times Book Prize, the J. Anthony Lukas Book Prize, and the Financial Times and McKinsey Business Book of the Year A New York Times Editors’ Choice ONE OF THE YEAR'S BEST BOOKS: The Washington Post • The Financial Times • Slate • The Atlantic • Time • Forbes “[How Music Got Free] has the clear writing and brisk reportorial acumen of a Michael Lewis book.”—Dwight Garner, The New York Times What happens when an entire generation commits the same crime? How Music Got Free is a riveting story of obsession, music, crime, and money, featuring visionaries and criminals, moguls and tech-savvy teenagers. It’s about the greatest pirate in history, the most powerful executive in the music business, a revolutionary invention and an illegal website four times the size of the iTunes Music Store. Journalist Stephen Witt traces the secret history of digital music piracy, from the German audio engineers who invented the mp3, to a North Carolina compact-disc manufacturing plant where factory worker Dell Glover leaked nearly two thousand albums over the course of a decade, to the high-rises of midtown Manhattan where music executive Doug Morris cornered the global market on rap, and, finally, into the darkest recesses of the Internet. Through these interwoven narratives, Witt has written a thrilling book that depicts the moment in history when ordinary life became forever entwined with the world online—when, suddenly, all the music ever recorded was available for free. In the page-turning tradition of writers like Michael Lewis and Lawrence Wright, Witt’s deeply reported first book introduces the unforgettable characters—inventors, executives, factory workers, and smugglers—who revolutionized an entire artform, and reveals for the first time the secret underworld of media pirates that transformed our digital lives. An irresistible never-before-told story of greed, cunning, genius, and deceit, How Music Got Free isn’t just a story of the music industry—it’s a must-read history of the Internet itself.

Authors: Stephen Richard Witt
Categories: Music
Type: BOOK - Published: 2015-06-18 - Publisher: Random House
Meet Dell Glover – the accidental pirate Meet ‘Kali’ – the mastermind And meet Karlheinz – the man who made it all possible How Music Got Free is a blistering story of obsession, music and obscene money. A story of visionaries, criminals and tycoons. It’s about the greatest pirate in

Authors: Stephen Witt
Categories: Downloading of data
Type: BOOK - Published: 2016-04-01 - Publisher: Random House
"What links Taylor Swift to a factory worker? Kanye West to a German engineer? BeyoncU to a boardroom mogul? They've all changed the face of the music business, in the most unexpected ways. How Music Got Free is the incredible true story of how online piracy and the MP3 revolutionised

Authors: Stephen Witt
Categories: Downloading of data
Type: BOOK - Published: 2015-06-18 - Publisher: Random House
For fans of The Social Network, the story of an accidental pirate, a mastermind, and a mogul. How Music Got Free is a blistering story of obsession, music and obscene money. A story of visionaries and criminals, tycoons and audiophiles with golden ears. Itâe(tm)s about the greatest pirate in history,