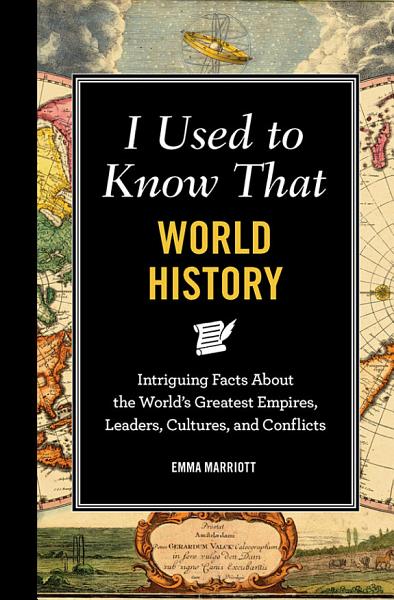 It can be difficult to keep different historical events and figures straight in your head, which is why I Used to Know That: World History presents major episodes in history with short, easily understood sections. Among the people, movements, and events covered are: · Ancient Greece and Rome-Learn about the birth of democracy and the death of the Roman Republic · The Middle Ages-From the Crusades to the Hundred Years War and the signing of the Magna Carta to the Black Plague · The Renaissance-A cultural revival that changed art, poetry, learning, and religion forever · The Revolutionary War-How America became independent; George Washington, the “father of the nation” · The Age of Empire-European colonialism in Africa and Asia; American expansion and the Civil War · Wars of the 20th Century-World War I and World War II; Hitler, Stalin, Churchill, and Roosevelt; the Cold War; the rise and fall of fascism and communism Packed with important facts and sweeping overviews of historical events, I Used to Know That: World History is essential reading for anyone who wants to understand the history of civilization and the geopolitical situation of today.

I Used to Know That: World History

Authors: Emma Marriott
Categories: Reference
Type: BOOK - Published: 2012-04-12 - Publisher: Penguin
It can be difficult to keep different historical events and figures straight in your head, which is why I Used to Know That: World History presents major episodes in history with short, easily understood sections. Among the people, movements, and events covered are: · Ancient Greece and Rome-Learn about the

I Used to Know That

Authors: Emma Marriott
Categories: History
Type: BOOK - Published: 2012-05-14 - Publisher: Michael O'Mara Books
Travel back through time to learn about the invasions of Britain, the Renaissance, the American, French and Russian Revolutions, World Wars I and II and the Cold War... and everything else you forgot from your school history lessons.

I Used to Know That

Authors: Caroline Taggart
Categories: Reference
Type: BOOK - Published: 2010-12-15 - Publisher: Michael O'Mara Books
If you've forgotten the capital city of Chile; the basics of osmosis; how to solve a quadratic equation; the names of the Bennet sisters in Pride and Prejudice; who wrote the famous poem about daffodils; the use of a conjunction or the number of continents in the world, I Used

A Fictional History of the United States (with Huge Chunks Missing)

That Used To Be Us

Authors: Thomas Friedman, Michael Mandelbaum
Categories: Social Science
Type: BOOK - Published: 2011-09-08 - Publisher: Hachette UK
America has a huge problem. It faces four major challenges, on which its future depends, and it is failing to meet them. In What's Wrong with America?, Thomas L. Friedman and Michael Mandelbaum analyze those challenges - globalization, the revolution in information technology, the nation's chronic deficits, and its pattern

I Used to Be Somebody

Authors: Bob Wynn, Tom O'Connell
Categories: Biography & Autobiography
Type: BOOK - Published: 2009-04 - Publisher: Tate Publishing
The Boss.' That's who Bob Wynn was. The boss of some two hundred shows divided amongst NBC, ABC, CBS, and PBS from the 1960s to the 1990s. As hard as it was to negotiate the muddy waters of network management, high-school dropout Bob 'Boss' Wynn demanded-and received - total control

The Cold War and After

Authors: Sean M. Lynn-Jones, Steven E. Miller
Categories: Political Science
Type: BOOK - Published: 1993 - Publisher: MIT Press
The Cold War and After presents a collection of well-reasoned arguments selected from the journal International Security on the causes of the Cold War and the effect of its aftermath on the peaceful coexistence of European states. This new edition includes all of the material from the first edition, plus

A Compend of History from the Earliest Times