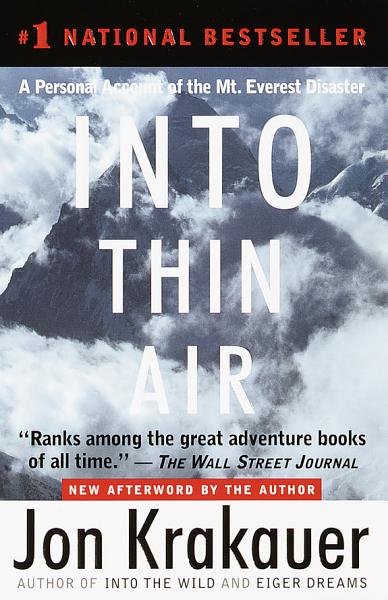 #1 NATIONAL BESTSELLER • "A harrowing tale of the perils of high-altitude climbing, a story of bad luck and worse judgment and of heartbreaking heroism." —PEOPLE A bank of clouds was assembling on the not-so-distant horizon, but journalist-mountaineer Jon Krakauer, standing on the summit of Mt. Everest, saw nothing that "suggested that a murderous storm was bearing down." He was wrong. The storm, which claimed five lives and left countless more--including Krakauer's--in guilt-ridden disarray, would also provide the impetus for Into Thin Air, Krakauer's epic account of the May 1996 disaster. By writing Into Thin Air, Krakauer may have hoped to exorcise some of his own demons and lay to rest some of the painful questions that still surround the event. He takes great pains to provide a balanced picture of the people and events he witnessed and gives due credit to the tireless and dedicated Sherpas. He also avoids blasting easy targets such as Sandy Pittman, the wealthy socialite who brought an espresso maker along on the expedition. Krakauer's highly personal inquiry into the catastrophe provides a great deal of insight into what went wrong. But for Krakauer himself, further interviews and investigations only lead him to the conclusion that his perceived failures were directly responsible for a fellow climber's death. Clearly, Krakauer remains haunted by the disaster, and although he relates a number of incidents in which he acted selflessly and even heroically, he seems unable to view those instances objectively. In the end, despite his evenhanded and even generous assessment of others' actions, he reserves a full measure of vitriol for himself. This updated trade paperback edition of Into Thin Air includes an extensive new postscript that sheds fascinating light on the acrimonious debate that flared between Krakauer and Everest guide Anatoli Boukreev in the wake of the tragedy. "I have no doubt that Boukreev's intentions were good on summit day," writes Krakauer in the postscript, dated August 1999. "What disturbs me, though, was Boukreev's refusal to acknowledge the possibility that he made even a single poor decision. Never did he indicate that perhaps it wasn't the best choice to climb without gas or go down ahead of his clients." As usual, Krakauer supports his points with dogged research and a good dose of humility. But rather than continue the heated discourse that has raged since Into Thin Air's denouncement of guide Boukreev, Krakauer's tone is conciliatory; he points most of his criticism at G. Weston De Walt, who coauthored The Climb, Boukreev's version of events. And in a touching conclusion, Krakauer recounts his last conversation with the late Boukreev, in which the two weathered climbers agreed to disagree about certain points. Krakauer had great hopes to patch things up with Boukreev, but the Russian later died in an avalanche on another Himalayan peak, Annapurna I. In 1999, Krakauer received an Academy Award in Literature from the American Academy of Arts and Letters--a prestigious prize intended "to honor writers of exceptional accomplishment." According to the Academy's citation, "Krakauer combines the tenacity and courage of the finest tradition of investigative journalism with the stylish subtlety and profound insight of the born writer. His account of an ascent of Mount Everest has led to a general reevaluation of climbing and of the commercialization of what was once a romantic, solitary sport; while his account of the life and death of Christopher McCandless, who died of starvation after challenging the Alaskan wilderness, delves even more deeply and disturbingly into the fascination of nature and the devastating effects of its lure on a young and curious mind."

Authors: Jon Krakauer
Categories: Biography & Autobiography
Type: BOOK - Published: 1998-11-12 - Publisher: Anchor
#1 NATIONAL BESTSELLER • "A harrowing tale of the perils of high-altitude climbing, a story of bad luck and worse judgment and of heartbreaking heroism." —PEOPLE A bank of clouds was assembling on the not-so-distant horizon, but journalist-mountaineer Jon Krakauer, standing on the summit of Mt. Everest, saw nothing that

Authors: Franklin W. Dixon
Categories: Juvenile Fiction
Type: BOOK - Published: 2013-10-22 - Publisher: Simon and Schuster
When the daughter of Bayport's amusement park owner goes missing, Joe and Frank follow clues to find the girl and determine if her disappearance is related to that of another missing person. Simultaneous.

Authors: Vivian Wagner
Categories: Study Aids
Type: BOOK - Published: 2012-02-24 - Publisher: Hyperink Inc
ABOUT THE BOOK When I first read Jon Krakauer’s Into Thin Air: A Personal Account of the Mt. Everest Disaster, I was enthralled and amazed. The story he tells about a doomed Mt. Everest expedition in 1996 is both thrilling and terrifying, and it also has a lot to say