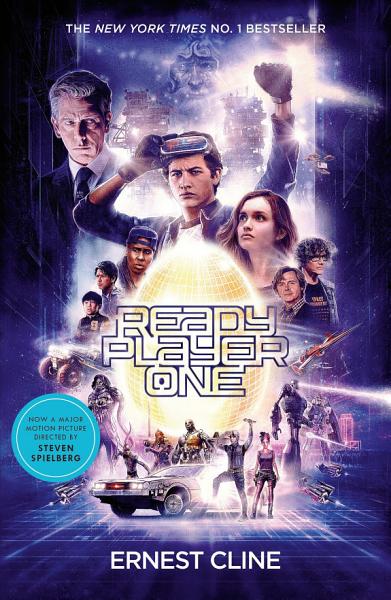 PRE-ORDER NOW - READY PLAYER TWO: THE SEQUEL ______________________ THE BOOK BEHIND THE MAJOR MOTION PICTURE DIRECTED BY STEVEN SPIELBERG Now available for the first time in a beautiful hardback edition, perfect for hardcore fans and collectors A world at stake. A quest for the ultimate prize. Are you ready? It's the year 2044, and the real world has become an ugly place. We're out of oil. We've wrecked the climate. Famine, poverty, and disease are widespread. Like most of humanity, Wade Watts escapes this depressing reality by spending his waking hours jacked into the OASIS, a sprawling virtual utopia where you can be anything you want to be, where you can live and play and fall in love on any of ten thousand planets. And like most of humanity, Wade is obsessed by the ultimate lottery ticket that lies concealed within this alternate reality: OASIS founder James Halliday, who dies with no heir, has promised that control of the OASIS - and his massive fortune - will go to the person who can solve the riddles he has left scattered throughout his creation. For years, millions have struggled fruitlessly to attain this prize, knowing only that the riddles are based in the culture of the late twentieth century. And then Wade stumbles onto the key to the first puzzle. Suddenly, he finds himself pitted against thousands of competitors in a desperate race to claim the ultimate prize, a chase that soon takes on terrifying real-world dimensions - and that will leave both Wade and his world profoundly changed. ____________________________________ If you loved READY PLAYER ONE and can't wait for more, check out ARMADA, Ernest Cline's geek masterpiece! 'Wildly original and stuffed with irresistible nostalgia, Ready Player One is a spectacularly genre-busting, ambitious, and charming debut' Independent 'Part intergalactic scavenger hunt, part romance, and all heart' CNN 'Ernest Cline's novel deserves to be a modern classic' SciFiNow 'Gorgeously geeky, superbly entertaining, this really is a spectacularly successful debut' Daily Mail

Authors: Ernest Cline
Categories: Fiction
Type: BOOK - Published: 2011-08-18 - Publisher: Random House
PRE-ORDER NOW - READY PLAYER TWO: THE SEQUEL ______________________ THE BOOK BEHIND THE MAJOR MOTION PICTURE DIRECTED BY STEVEN SPIELBERG Now available for the first time in a beautiful hardback edition, perfect for hardcore fans and collectors A world at stake. A quest for the ultimate prize. Are you ready?

Authors: Ernest Cline
Categories: Fiction
Type: BOOK - Published: 2020-11-24 - Publisher: Random House
_____________________ AN UNEXPECTED QUEST. TWO WORLDS AT STAKE. ARE YOU READY? Days after winning OASIS founder James Halliday's contest, Wade Watts makes a discovery that changes everything. Hidden within Halliday's vaults, waiting for his heir to find it, lies a technological advancement that will once again change the world and

Authors: Michael Conrad
Categories: Fiction
Type: BOOK - Published: 2018-05-17 - Publisher: Createspace Independent Publishing Platform
High quality exclusive images with premium quality, everyone will be happy with it! Book is inspired by Steven Spielberg film 2018 This book is perfect gift for kids and teens Each illustration is printed on a separate sheet (8.5'' x 11'') to avoid bleed through

Authors: aBookaDay
Categories: Fiction
Type: BOOK - Published: 2016-07-27 - Publisher:
Warning: This is an independent addition to Ready Player One, meant to enhance your experience of the original book. If you have not yet bought the original copy, make sure to purchase it before buying this unofficial summary from aBookaDay. In the world Wade Watts was born to, human civilization

Summary of Ready Player One by Ernest Cline

Authors: aBookaDay
Categories: Puzzles
Type: BOOK - Published: 2011 - Publisher:
The setting of the novel is a dystopian Earth in 2044/2045. The planet, which became a globalized civilization, is facing a global energy crisis, climate change and several other issues. Most of the people spend their time in a virtual space/reality known as the OASIS. The designer of the OASIS

The Art of Ready Player One

Authors: Gina McIntyre
Categories: Performing Arts
Type: BOOK - Published: 2018-04-17 - Publisher: Insight Editions
Discover the captivating art of Steven Spielberg’s Ready Player One. Our dystopian world lies on the brink of chaos and collapse, but the people have found their salvation in the OASIS, an expansive virtual reality universe created by the brilliant and eccentric James Halliday. When Halliday dies, he leaves his

Authors: David Bolton
Categories: Performing Arts
Type: BOOK - Published: 2020-06-18 - Publisher:
StorylineIn the year 2045, the real world is a harsh place. The only time Wade Watts (Tye Sheridan) truly feels alive is when he escapes to the OASIS, an immersive virtual universe where most of humanity spends their days. In the OASIS, you can go anywhere, do anything, be anyone-the

Authors: Speedyreads
Categories: Reference
Type: BOOK - Published: 2018-04-24 - Publisher: Blurb
"Wanna Read But Not Enough Time? Then, grab a SpeedyReads of Ready Player One by Ernest Cline now! Here's a sample of what you'll see in this book: Summary of Ready Player One The novel starts with Wade Watts, the narrator and central character of the book, remembering the death