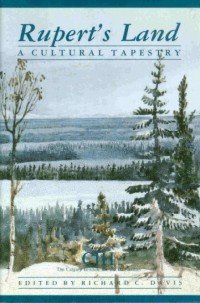 For nearly two centuries, the Company of Adventurers trading into Hudson’s Bay exported from Rupert’s Land hundreds of thousands of pelts, leaving in exchange a wealth of European trade goods. Yet opening the vast northwest had more far-reaching effects than an exchange of beaver and beads. Essays by a dozen scholars explore the cultural tapestry woven by explorers, artists, settlers, traders, missionaries, and map makers. Richard Ruggles traces the mapping of the territory from the mysterious gaps of the 1500s to the grids of the nineteenth century. John L. Allen recounts how fur-trade explorations encouraged Thomas Jefferson to dispatch the Lewis and Clark expedition. Irene Spry retells the gusto with which John Palliser, a half-century later, studied the prairies. Olive Dickason examines the first contacts of Europeans with Inuit and Amerindians, while James G.E. Smith presents the differing views of the land held by Caribou Eater Chipewyan and traders. Robert H. Cockburn, following Oberholtzer in 1912 and Downes in 1939, finds two more recent views of the Caribou Eater Chipewyan. Fred Crabb points out that much of this century’s church work has been carried out by native and mixed-blood residents. Clive Holland outlines Franklin’s first land expedition. Sylvia Van Kirks clerk in the trade finds his opinion of “this rascally and ungrateful country“ gradually changing, while R. Douglas Francis compares the ideal image and reality as the West opened to settlement. Robert Stacey tells how the theories of the picturesque and the sublime influenced artists portrayals of the West and the Arctic; Edward Cavell illustrates how the camera recorded Rupert’‘s Land and changed our perceptions of it as well. Forty-six maps, drawings and paintings, and documentary photographs illustrate the tapestry of the text.

From Rupert's Land to Canada

An Ethnohistorian in Rupert’s Land

Authors: James Hargrave
Categories: History
Type: BOOK - Published: 2014-06-22 - Publisher: McGill-Queen's Press - MQUP
A collection of letters that document the experiences of a 'lowland' Scottish family in North America, as well as happenings at the administrative center of the Hudson's Bay Company fur trade.

Papāmas; or, The chiefs' address, by the bishop of Rupert's Land

A Londoner in Rupert's Land

The Howse in Rupert's Land