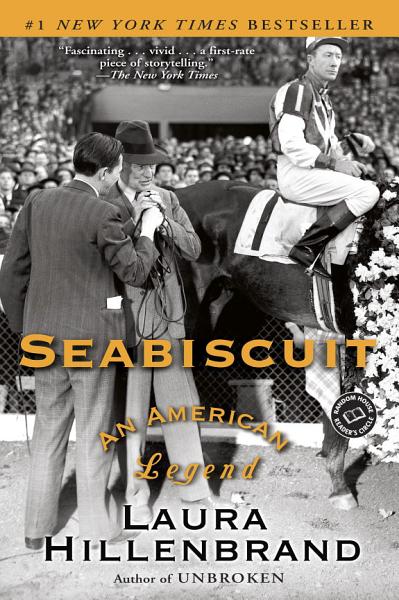 #1 NEW YORK TIMES BESTSELLER • From the author of the runaway phenomenon Unbroken comes a universal underdog story about the horse who came out of nowhere to become a legend. Seabiscuit was one of the most electrifying and popular attractions in sports history and the single biggest newsmaker in the world in 1938, receiving more coverage than FDR, Hitler, or Mussolini. But his success was a surprise to the racing establishment, which had written off the crooked-legged racehorse with the sad tail. Three men changed Seabiscuit’s fortunes: Charles Howard was a onetime bicycle repairman who introduced the automobile to the western United States and became an overnight millionaire. When he needed a trainer for his new racehorses, he hired Tom Smith, a mysterious mustang breaker from the Colorado plains. Smith urged Howard to buy Seabiscuit for a bargain-basement price, then hired as his jockey Red Pollard, a failed boxer who was blind in one eye, half-crippled, and prone to quoting passages from Ralph Waldo Emerson. Over four years, these unlikely partners survived a phenomenal run of bad fortune, conspiracy, and severe injury to transform Seabiscuit from a neurotic, pathologically indolent also-ran into an American sports icon. BONUS: This edition contains a Seabiscuit discussion guide and an excerpt from Unbroken. Praise for Seabiscuit “Fascinating . . . Vivid . . . A first-rate piece of storytelling, leaving us not only with a vivid portrait of a horse but a fascinating slice of American history as well.”—The New York Times “Engrossing . . . Fast-moving . . . More than just a horse’s tale, because the humans who owned, trained, and rode Seabiscuit are equally fascinating. . . . [Laura Hillenbrand] shows an extraordinary talent for describing a horse race so vividly that the reader feels like the rider.”—Sports Illustrated “REMARKABLE . . . MEMORABLE . . . JUST AS COMPELLING TODAY AS IT WAS IN 1938.”—The Washington Post

Authors: Laura Hillenbrand
Categories: Biography & Autobiography
Type: BOOK - Published: 2003-07-01 - Publisher: Ballantine Books
#1 NEW YORK TIMES BESTSELLER • From the author of the runaway phenomenon Unbroken comes a universal underdog story about the horse who came out of nowhere to become a legend. Seabiscuit was one of the most electrifying and popular attractions in sports history and the single biggest newsmaker in

Authors: Ralph Moody
Categories: Sports & Recreation
Type: BOOK - Published: 2003-01-01 - Publisher: U of Nebraska Press
During the Great Depression, Seabiscuit captured the hearts of Americans from the streets to the White House, winning more money than any horse at that time and shattering speed records across the country. Moving and inspirational, "Come on Seabiscuit!" is a reminder of the qualities that make a real American

Authors: B. K. Beckwith
Categories: Pets
Type: BOOK - Published: 2016-08-09 - Publisher: Pickle Partners Publishing
Seabiscuit: The Saga of a Great Champion is the first complete story of the legendary thoroughbred who captured the heart of a nation. Noted track writer B. K. Beckwith called Seabiscuit’s career a saga because, like a Greek myth or beloved fairy tale, it is the tale of a forgotten,

A Study Guide for Laura Hillenbrand's "Seabiscuit: An American Legend"

Authors: James Buckley, Jr., Who HQ
Categories: Juvenile Nonfiction
Type: BOOK - Published: 2015-10-20 - Publisher: Penguin
In the middle of the worst depression in U.S. history, one young racehorse lifted a nation's spirits. Seabiscuit was born in 1933 on a farm in Kentucky. Though bred for racing, he was weak and undersized. He slept too long and ate too much. Against the odds, he began to

Authors: Laura Hillenbrand
Categories: Horse racing
Type: BOOK - Published: 2002 - Publisher: HarperCollins UK
From the author of 'Unbroken' - a major motion picture releasing in 2015 - this is the bestselling true story of three men and their dreams for a racehorse, Seabiscuit. In 1938 one figure received more press coverage than Mussolini, Hitler or Roosevelt. He was a cultural icon and a

Authors: Laura Hillenbrand
Categories: Sports & Recreation
Type: BOOK - Published: 2002 - Publisher: Turtleback Books
The author retraces the journey of Seabiscuit, a horse with crooked legs and a pathetic tail that made racing history in 1938, thanks to the efforts of a trainer, owner, and jockey who transformed a bottom-level racehorse into a legend.

Authors: Gary Ross
Categories: Performing Arts
Type: BOOK - Published: 2003 - Publisher:
True story of the undersized Depression-era racehorse whose victories lifted not only the spirits of the team behind it but also those of their nation.