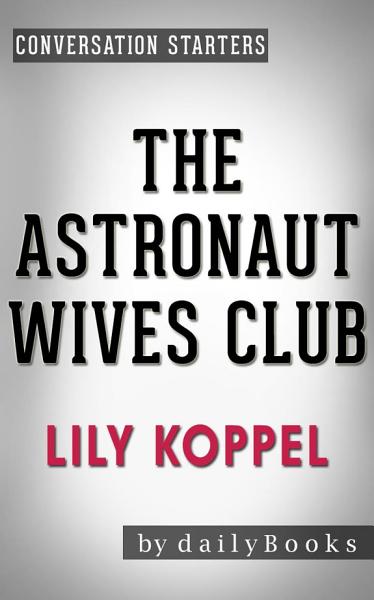 The Astronaut Wives Club: by Lily Koppel | Conversation Starters A Brief Look Inside: The Astronaut Wives Club, Lily Koppel's latest nonfiction book, tells the stories of the wives of the astronauts who were part of the space program during the space race of the 1950s, 60s, and 70s. History has typically told the story of the astronauts, but not much is known about the wives and children until now. The wives went from being military wives to the closest thing America had to royalty overnight. They went on to have tea with Jackie Kennedy, appeared on the covers of magazines, and went to many press conferences all while keeping things together at home. The wives formed a close bond that withstood the many divorces and tragedies that occurred. Their bond eventually led them to form The Astronaut Wives Club. The Astronaut Wives Club became a New York Times Best Seller. An American television series inspired by the book premiered on the television network ABC on June 18, 2015. EVERY GOOD BOOK CONTAINS A WORLD FAR DEEPER than the surface of its pages. The characters and their world come alive, and the characters and its world still live on. Conversation Starters is peppered with questions designed to bring us beneath the surface of the page and invite us into the world that lives on. These questions can be used to... Create Hours of Conversation: • Foster a deeper understanding of the book • Promote an atmosphere of discussion for groups • Assist in the study of the book, either individually or corporately • Explore unseen realms of the book as never seen before Disclaimer: This book you are about to enjoy is an independent resource to supplement the original book, enhancing your experience of The Astronaut Wives Club. If you have not yet purchased a copy of the original book, please do before purchasing this unofficial Conversation Starters.

Authors: dailyBooks
Categories: Study Aids
Type: BOOK - Published: 2016-09-06 - Publisher:
The Astronaut Wives Club: by Lily Koppel | Conversation Starters A Brief Look Inside: The Astronaut Wives Club, Lily Koppel's latest nonfiction book, tells the stories of the wives of the astronauts who were part of the space program during the space race of the 1950s, 60s, and 70s. History

Authors: Lily Koppel
Categories: Biography & Autobiography
Type: BOOK - Published: 2013-06-06 - Publisher: Hachette UK
As American astronauts were launched on death-defying missions, television cameras focused on the brave smiles of their wives. Overnight, these women were transformed from shy military spouses to American royalty: having tea with Jackie Kennedy, attending high society galas, and being featured on the cover of Life magazine. They quickly

Authors: Trivion Books
Categories: Study Aids
Type: BOOK - Published: 2016-09-09 - Publisher:
Trivia-on-Book: The Astronaut Wives Club by Lily Koppel Take the challenge yourself and share it with friends and family for a time of fun! You may have read the book, but not have liked it. You may have liked the book, but not be a fan. You may call yourself

Authors: Nancy Hendricks
Categories: History
Type: BOOK - Published: 2018-08-17 - Publisher: ABC-CLIO
This informative two-volume set provides readers with an understanding of the fads and crazes that have taken America by storm from colonial times to the present. Entries cover a range of topics, including food, entertainment, fashion, music, and language. • Presents well-researched, factual material accessibly and engagingly • Presents what

Authors: Kristen Strong
Categories: Religion
Type: BOOK - Published: 2015-09-08 - Publisher: Revell
Whether chosen and celebrated--like going off to college or welcoming your first baby--or unexpected and anxiety-inducing--like losing a job or grappling with a broken trust--all change brings stress. Kristen Strong knows about change--especially the kind you didn't choose or expect. What she's fought hard to learn over the years is

Representations of Masculinity in Literature and Film

Authors: Sara Martín
Categories: Performing Arts
Type: BOOK - Published: 2020-09-11 - Publisher: Cambridge Scholars Publishing
How are men represented on the printed page, the stage and the screen? What do these representations say about masculinity in the past, the present, and the future? The twelve essays in this volume explore the different ways in which men and masculinity have been represented, from the plays of

Authors: Steven M. Ortiz
Categories: Sports & Recreation
Type: BOOK - Published: 2020-08-24 - Publisher: University of Illinois Press
In The Sport Marriage, Steven M. Ortiz draws on studies he conducted over nearly three decades that focus on the marital realities confronted by women married to male professional athletes. These women, who are usually portrayed in unflattering and/or unrealistic terms, face enormous challenges in their attempts to establish and

Authors: Ryan S. Walters
Categories: History
Type: BOOK - Published: 2021-05-25 - Publisher: Simon and Schuster
On January 27, 1967, astronauts Gus Grissom, Ed White, and Roger Chaffee climbed into a new spacecraft perched atop a large Saturn rocket at Kennedy Space Center in Florida for a routine dress rehearsal of their upcoming launch into orbit, then less than a month away. All three astronauts were