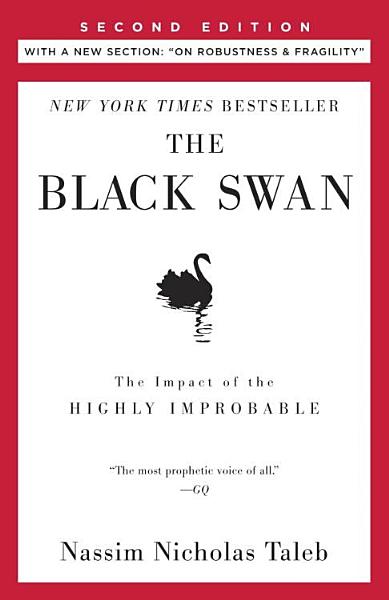 The Black Swan is a standalone book in Nassim Nicholas Taleb’s landmark Incerto series, an investigation of opacity, luck, uncertainty, probability, human error, risk, and decision-making in a world we don’t understand. The other books in the series are Fooled by Randomness, Antifragile, Skin in the Game, and The Bed of Procrustes. A black swan is a highly improbable event with three principal characteristics: It is unpredictable; it carries a massive impact; and, after the fact, we concoct an explanation that makes it appear less random, and more predictable, than it was. The astonishing success of Google was a black swan; so was 9/11. For Nassim Nicholas Taleb, black swans underlie almost everything about our world, from the rise of religions to events in our own personal lives. Why do we not acknowledge the phenomenon of black swans until after they occur? Part of the answer, according to Taleb, is that humans are hardwired to learn specifics when they should be focused on generalities. We concentrate on things we already know and time and time again fail to take into consideration what we don’t know. We are, therefore, unable to truly estimate opportunities, too vulnerable to the impulse to simplify, narrate, and categorize, and not open enough to rewarding those who can imagine the “impossible.” For years, Taleb has studied how we fool ourselves into thinking we know more than we actually do. We restrict our thinking to the irrelevant and inconsequential, while large events continue to surprise us and shape our world. In this revelatory book, Taleb explains everything we know about what we don’t know, and this second edition features a new philosophical and empirical essay, “On Robustness and Fragility,” which offers tools to navigate and exploit a Black Swan world. Elegant, startling, and universal in its applications, The Black Swan will change the way you look at the world. Taleb is a vastly entertaining writer, with wit, irreverence, and unusual stories to tell. He has a polymathic command of subjects ranging from cognitive science to business to probability theory. The Black Swan is a landmark book—itself a black swan. Praise for Nassim Nicholas Taleb “The most prophetic voice of all.”—GQ Praise for The Black Swan “[A book] that altered modern thinking.”—The Times (London) “A masterpiece.”—Chris Anderson, editor in chief of Wired, author of The Long Tail “Idiosyncratically brilliant.”—Niall Ferguson, Los Angeles Times “The Black Swan changed my view of how the world works.”—Daniel Kahneman, Nobel laureate “[Taleb writes] in a style that owes as much to Stephen Colbert as it does to Michel de Montaigne. . . . We eagerly romp with him through the follies of confirmation bias [and] narrative fallacy.”—The Wall Street Journal “Hugely enjoyable—compelling . . . easy to dip into.”—Financial Times “Engaging . . . The Black Swan has appealing cheek and admirable ambition.”—The New York Times Book Review

Authors: Nassim Nicholas Taleb
Categories: Business & Economics
Type: BOOK - Published: 2010-05-11 - Publisher: Random House
The Black Swan is a standalone book in Nassim Nicholas Taleb’s landmark Incerto series, an investigation of opacity, luck, uncertainty, probability, human error, risk, and decision-making in a world we don’t understand. The other books in the series are Fooled by Randomness, Antifragile, Skin in the Game, and The Bed

Authors: Nassim Nicholas Taleb
Categories: Business & Economics
Type: BOOK - Published: 2007-04-17 - Publisher: Random House
The Black Swan is a standalone book in Nassim Nicholas Taleb’s landmark Incerto series, an investigation of opacity, luck, uncertainty, probability, human error, risk, and decision-making in a world we don’t understand. The other books in the series are Fooled by Randomness, Antifragile, and The Bed of Procrustes. A black

Authors: Celia Bridle
Categories: Black swan
Type: BOOK - Published: 2010 - Publisher:
A black swan escapes from a cage and flies away to alight at a village by a lake. The villagers there believe that birds are harbingers of good fortune, and each year they build nests beside the lake to lure them. They ask the swan to stay and incubate an

Authors: Wendy E. Nunan, Terence D. Nunan
Categories: New South Wales
Type: BOOK - Published: 1989 - Publisher:
Descendants of Edward Swan also know by the name Hornsby. He was transported to Australia as a convict in 1818. His wife Mary Ann and children arrived there in 1823. The family settled in the Illawarra district.

Authors: Terje Aven
Categories: Business & Economics
Type: BOOK - Published: 2014-08-13 - Publisher: Routledge
Risk, Surprises and Black Swans provides an in depth analysis of the risk concept with a focus on the critical link to knowledge; and the lack of knowledge, that risk and probability judgements are based on. Based on technical scientific research, this book presents a new perspective to help you

An abridgement of J. W.'s life and travels ... Second edition, corrected and improved

Authors: Raphael Sabatini
Categories: Fiction
Type: BOOK - Published: 2008-01 - Publisher: House of Stratus
When Priscilla Harradine travels back to England on the Centaur she has no cause to expect her journey will be remotely eventful. But also on board is Charles de Bernis - a mysterious and intriguing buccaneer. Just as their friendship blossoms, a dark figure from de Bernis' past emerges to

Authors: Rodney James Giblett
Categories: Nature
Type: BOOK - Published: 2013 - Publisher: Intellect Books
Tracing the life of the plants and animals of Forrest dale Lake through the six seasons of the local indigenous people, the first part of Black Swan Lake presents a wetlands calendar over a yearly cycle of the rising, falling and drying waters of this internationally important wetland in south-western