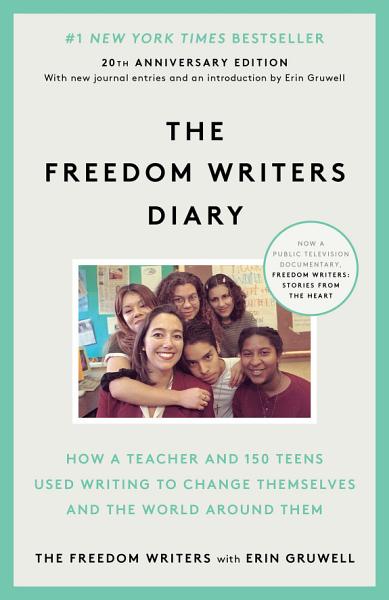 #1 NEW YORK TIMES BESTSELLER • The twentieth anniversary edition of the classic story of an incredible group of students and the teacher who inspired them, featuring updates on the students’ lives, new journal entries, and an introduction by Erin Gruwell Now a public television documentary, Freedom Writers: Stories from the Heart In 1994, an idealistic first-year teacher in Long Beach, California, named Erin Gruwell confronted a room of “unteachable, at-risk” students. She had intercepted a note with an ugly racial caricature and angrily declared that this was precisely the sort of thing that led to the Holocaust. She was met by uncomprehending looks—none of her students had heard of one of the defining moments of the twentieth century. So she rebooted her entire curriculum, using treasured books such as Anne Frank’s diary as her guide to combat intolerance and misunderstanding. Her students began recording their thoughts and feelings in their own diaries, eventually dubbing themselves the “Freedom Writers.” Consisting of powerful entries from the students’ diaries and narrative text by Erin Gruwell, The Freedom Writers Diary is an unforgettable story of how hard work, courage, and determination changed the lives of a teacher and her students. In the two decades since its original publication, the book has sold more than one million copies and inspired a major motion picture Freedom Writers. And now, with this twentieth-anniversary edition, readers are brought up to date on the lives of the Freedom Writers, as they blend indispensable takes on social issues with uplifting stories of attending college—and watch their own children follow in their footsteps. The Freedom Writers Diary remains a vital read for anyone who believes in second chances.

Authors: Erin Gruwell, The Freedom Writers
Categories: Education
Type: BOOK - Published: 2008-09-16 - Publisher: Crown
A standards-based teacher’s guide from the educator behind the #1 New York Times bestseller The Freedom Writers Diary, with innovative teaching techniques that will engage, empower, and enlighten. Don’t miss the public television documentary Freedom Writers: Stories from the Heart In response to thousands of letters and e-mails from teachers

Authors: Erin Gruwell
Categories: Education
Type: BOOK - Published: 2007 - Publisher: Broadway
Percy is incredibly accident-prone, and holds the dubious record of the most accidents. Percy has had a small rivalary with Harold, however, they are always willing to help each other when in trouble.

Authors: The Freedom Writers, Erin Gruwell
Categories: Education
Type: BOOK - Published: 2009-08-18 - Publisher: Crown
Incredible stories of struggle, redemption, and the power of education from the teachers taught by Erin Gruwell and the #1 New York Times bestselling authors of The Freedom Writers Diary Don’t miss the public television documentary Freedom Writers: Stories from the Heart “These are the most influential professionals most of

Teach with Your Heart

The Freedom Writers Diary: How a Teacher and 150 Teens Used Writing to Change Themselves and the World Around Them

Authors: The Freedom Writers
Categories: Education
Type: BOOK - Published: 2006-12-01 - Publisher: Perfection Learning
Shocked by the teenage violence she witnessed during the Rodney King riots in Los Angeles, Erin Gruwell became a teacher at a high school rampant with hostility and racial intolerance. For many of these students-whose ranks included substance abusers, gang members, the homeless, and victims of abuse-Gruwell was the first