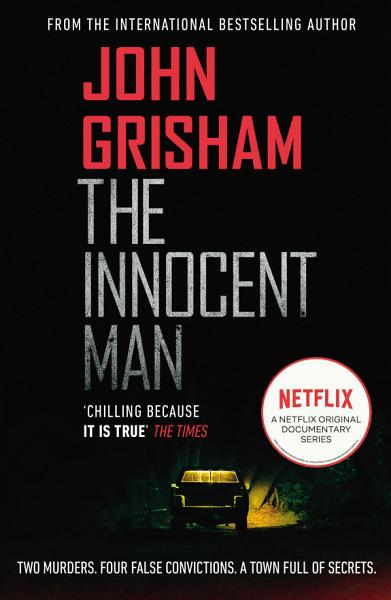 __________________ ***NOW A MAJOR NETFLIX SERIES*** A gripping true-crime story of a shocking miscarriage of justice, from international bestselling thriller author John Grisham. In the baseball draft of 1971, Ron Williamson was the first player chosen from Oklahoma. Signing with Oakland, he said goodbye to his small home town and left for California to pursue his dreams of glory. Six years later he was back, his dreams broken by a bad arm and bad habits - drinking, drugs and women. He began to show signs of mental illness. Unable to keep a job, he moved in with his mother and slept 20 hours a day on her sofa. In 1982, a 21 year-old cocktail waitress, Debra Sue Carter, was raped and murdered, and for five years the crime went unsolved. Finally, desperate for someone to blame, police came to suspect Ron Williamson and his friend Dennis Fritz. The two were finally arrested in 1987 and charged with murder. With no physical evidence, the prosecution's case was built on junk science and the testimony of jailhouse snitches and convicts. Dennis Fritz was found guilty and given a life sentence. Ron Williamson was sent to Death Row. But as Grisham methodically lays out, there was no case against him. Ron Williamson was wrongly condemned to die. If you believe that in America you are innocent until proven guilty, this book will shock you. If you believe in the death penalty, this book will disturb you. If you believe the criminal justice system is fair, this book will infuriate you. __________________ In 2018, THE INNOCENT MAN was adapted by Netflix into a gripping six-part true crime series. __________________ ‘A master at the art of deft characterisation and the skilful delivery of hair-raising crescendos' – Irish Independent 'John Grisham is the master of legal fiction' – Jodi Picoult 'The best thriller writer alive' – Ken Follett ‘John Grisham has perfected the art of cooking up convincing, fast-paced thrillers’ – Telegraph ‘Grisham is a superb, instinctive storyteller’ – The Times ‘Grisham's storytelling genius reminds us that when it comes to legal drama, the master is in a league of his own.’ – Daily Record ‘Masterful – when Grisham gets in the courtroom he lets rip, drawing scenes so real they're not just alive, they're pulsating’ – Mirror ‘A giant of the thriller genre’ – TimeOut

Episode of the Innocent Man in Trouble

Confessions of an Innocent Man

Authors: David R. Dow
Categories: Fiction
Type: BOOK - Published: 2019-04-09 - Publisher: Penguin
“Every person wrongfully convicted of a crime at some point dreams of getting revenge against the system. In Confessions of an Innocent Man, the dream comes true and in a spectacular way.”—John Grisham, New York Times bestselling author of The Reckoning A thrillingly suspenseful debut novel and a fierce howl

Ghost of the Innocent Man

Authors: Eclipse Lomf
Categories: Fiction
Type: BOOK - Published: 2012-01-06 - Publisher: Xlibris Corporation
An Innocent Man’s Revenge Sentenced to fifteen years for a crime that he didn’t commit, betrayed and abandoned by everyone he loved, Dwayne Johnson was released seven years later when his innocence was discovered. He was falsely accused by the alleged victims, set up by friends, and maliciously prosecuted by

The Innocent Man's First Proffer. Or, The Proposition of Lievtenant Collonel John Lilburne

Authors: K C Sivils
Categories: Detention of persons
Type: BOOK - Published: 2018-10-29 - Publisher:
500 years in the future, technology has changed. Humanity has not. One man's fate lies in the hands of a team of corrupt prosecutors bent on making their prosecutorial mark for personal gain. Standing in the path of injustice is Inspector Thomas Sullivan and an acquaintance from the past.Murder, political

Authors: Jameel Zookie McGee, Andrew Collins, Mark Tabb
Categories: Biography & Autobiography
Type: BOOK - Published: 2017-09-19 - Publisher: WaterBrook
Jameel McGee: “For the next three years not a day went by that I didn’t think about my son who I had never seen and the cop who had kept me from him. And for most of those three years I promised myself that if I ever saw this cop

Beyond the Glass House

Authors: Adam Wolfe
Categories: Biography & Autobiography
Type: BOOK - Published: 2006-01 - Publisher: Trafford Publishing
"It would just be utterly repugnant for me to think that I could send a man to prison for a crime that he did not commit."