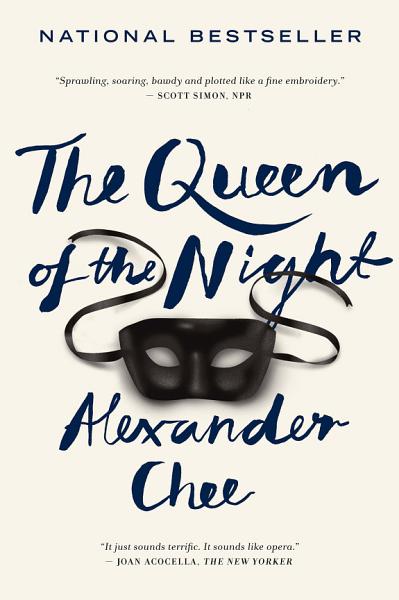 National Bestseller New York Times Book Review Editors’ Choice | An Indie Next Pick A Best Book of the Year from NPR, Boston Globe, Buzzfeed, Esquire, San Francisco Chronicle,Time Out, Self, Jezebel, The Portland Mercury, Electric Literature, and Entropy Magazine “It just sounds terrific. It sounds like opera.” —Joan Acocella, The New Yorker “Sprawling, soaring, bawdy, and plotted like a fine embroidery.” —Scott Simon, NPR “Dazzling.” —Wall Street Journal | “A brilliant performance.” —Washington Post “Sweeping, richly detailed.” —People | “Masterful.” —Wired | “Spellbinding.” —BuzzFeed A “wild opera of a novel,”* The Queen of the Night tells the mesmerizing story of Lilliet Berne, an orphan who left the American frontier for Europe and was swept into the glamour and terror of Second Empire France. She became a sensation of the Paris Opera, with every accolade but an original role—her chance at immortality. When one is offered to her, she finds the libretto is based on her deepest secret, something only four people have ever known. But who betrayed her? With “epic sweep, gorgeous language, and haunting details,”** Alexander Chee shares Lilliet’s cunning transformation from circus rider to courtesan to legendary soprano, retracing the path that led to the role that could secure her reputation—or destroy her with the secrets it reveals. “If Lilliet Berne were a man, she might have been what nineteenth-century novels would call a swashbuckler: the kind of destiny-courting, death-defying character who finds intrigue and peril (and somehow, always, a fantastic pair of pantaloons) around every corner.” —Entertainment Weekly

Authors: Paul Doherty
Categories: Claudia (Fictitious character)
Type: BOOK - Published: 2006 - Publisher:
In imperial Rome, children of the elite are being kidnapped and veteran soldiers are being violently murdered. Empress Helena calls on her secret agent Claudia to investigate and Claudia stumbles upon a problem of her own when she discovers the disinterred body of a Christian woman in her uncle's garden.

Authors: Dominique Collon
Categories: Art
Type: BOOK - Published: 2005 - Publisher: British Museum Publications Limited
A concise and beautifully designed book exploring the symbolism behind an exquisite Ancient Babylonian plaque found in southern Iraq. This spectacular terracotta plaque was the principal acquisition for the British Museum's 250th anniversary, and in 2004 was exhibited in various museums around the UK. Made between 1800 and 1859 BC,

Queen of the Night

Authors: Karen Wright
Categories: Germany
Type: BOOK - Published: 2019-11-16 - Publisher:
Beautiful photographs are paired with information about the life cycle of the elusive Peniocereus greggii, also known as "The Queen of the Night".

Authors: Karen Wright
Categories: Germany
Type: BOOK - Published: 1816 - Publisher:
Books about The Palace of the Queen of the Night, Set Design for 'The Magic Flute' by Wolfgang Amadeus Mozart (1756-91) for a Production in Berlin, 1816 (w/c).

The Queen of the Night (Ancient Rome Mysteries, Book 3)

Authors: Paul Doherty
Categories: Fiction
Type: BOOK - Published: 2012-10-30 - Publisher: Hachette UK
The slightest mistake could cost her life... In the summer of 314AD, dark figures lurking in the twilight of Roman society are on the prowl, and Rome is shocked by a series of gruesome murders in Paul Doherty's third novel featuring imperial secret agent Claudia. Perfect for fans of Lindsey