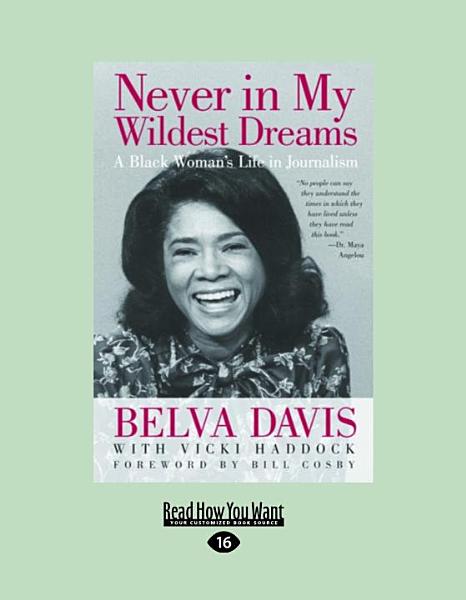 As the first black female television journalist in the western United States, Belva Davis overcame the obstacles of racism and sexism, and helped change the face and focus of television news. Now she is sharing the story of her extraordinary life in her poignantly honest memoir, Never in My Wildest Dreams. A reporter for almost five decades, Davis is no stranger to adversity. Born to a fifteen - year - old Louisiana laundress during the Great Depression, and raised in the overcrowded projects of Oakland, California, Davis suffered abuse, battled rejection, and persevered to achieve a career beyond her imagination. Davis has seen the world change in ways she never could have envisioned, from being verbally and physically attacked while reporting on the 1964 Republican National Convention in San Francisco to witnessing the historic election of Barack Obama in 2008. Davis worked her way up to reporting on many of the most explosive stories of recent times, including the Vietnam War protests, the rise and fall of the Black Panthers, the Peoples Temple cult mass suicides at Jonestown, the assassinations of San Francisco Mayor George Moscone and Supervisor Harvey Milk, the onset of the AIDS epidemic, and the aftermath of the terrorist attacks that first put Osama bin Laden on the FBI's Most Wanted List. She encountered a cavalcade of cultural icons: Malcolm X, Frank Sinatra, James Brown, Ronald Reagan, Huey Newton, Muhammad Ali, Alex Haley, Fidel Castro, Dianne Feinstein, Condoleezza Rice, and others. Throughout her career Davis soldiered in the trenches in the battle for racial equality and brought stories of black Americans out of the shadows and into the light of day. Still active in her seventies, Davis, the ''Walter Cronkite of the Bay Area,'' now hosts a weekly news roundtable and special reports at KQED, one of the nation's leading PBS stations,. In this way she has remained relevant and engaged in the stories of today, while offering her anecdote - rich perspective on the decades that have shaped us. ''No people can say they understand the times in which they have lived unless they have read this book.'' - Dr. Maya Angelou

Authors: Vicki Haddock, Belva Davis
Categories: Social Science
Type: BOOK - Published: 2011-08 - Publisher: ReadHowYouWant.com
As the first black female television journalist in the western United States, Belva Davis overcame the obstacles of racism and sexism, and helped change the face and focus of television news. Now she is sharing the story of her extraordinary life in her poignantly honest memoir, Never in My Wildest

Authors: Mito Orihara, CAROLE MORTIMER
Categories: Comics & Graphic Novels
Type: BOOK - Published: 2020-11-16 - Publisher: Harlequin / SB Creative
The face of a reclusive writer is unlike anything she imagined. Merlin becomes popular after writing a series featuring a handsome young man named Paul Free. Arabella is in charge of editing the series, but she can only contact the reclusive Merlin by mail. However, upon hearing that Merlin plans

IN HIS WILDEST DREAMS

Authors: Debbi Quattrone, Erio Hori
Categories: Comics & Graphic Novels
Type: BOOK - Published: 2018-10-09 - Publisher: Harlequin / SB Creative
Emma, a graduate student majoring in psychology, chose to experiment on Nick. Apparently he remembers the contents of his dreams vividly, and she figures he must have a lot of free time thanks to his wealth. She’s sure she’ll be able to collect useful data. But it turns out Nick’s

Authors: Leslie Thomas
Categories: Biography & Autobiography
Type: BOOK - Published: 2008-09-04 - Publisher: Random House
From Barnardo boy to original virgin soldier; from apprentice journalist in London's Fleet Street to famous novelist... At times funny, at times sad, but always honest and utterly compulsive, Leslie Thomas's story is straight out of fiction. As an orphan, he picked his way through the rubble of post-war Britain

Authors: Gail Blanke
Categories: Self-Help
Type: BOOK - Published: 1999-05-07 - Publisher: Simon and Schuster
A collection of ideas and strategies for women on how to design and live the life of their dreams furnishes practical tools for overcoming perceived limitations and tips on enlisting the help of others in pursuing their goals. Reprint. 40,000 first printing.

Authors: Christina Dodd
Categories: Fiction
Type: BOOK - Published: 2009-10-13 - Publisher: Harper Collins
Since she was a little girl, Celeste has had one burning desire:to marry Ellery Throckmorton. But what chance does a gardener's daughter have of capturing the heart of one of England's wealthiest gentlemen? However, the education she receives at the Distinguished Academy of Governesses enables Celeste to return to Blythe

Beyond My Wildest Dreams

Authors: Frank J. Stoppa
Categories: Biography & Autobiography
Type: BOOK - Published: 2002 - Publisher: Trafford Publishing
All proceeds from the sale of this book are being donated to the Catholic Medical Foundation. "Ask and you shall receive; Seek and You shall find; Knock and it shall be open to you." The author's journey is one of love, labor and longing and shows how God can answer